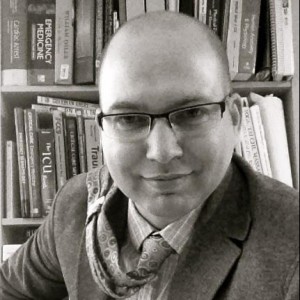 A paramedic ambulance is en-route to your emergency department with a 55 y/o male in cardiac arrest. Information provided so far indicated it was a witnessed arrest, and CPR was immediately in progress. EMS arrived to find the man in ventricular fibrillation. He was immediately defibrillated, and a humeral IO was inserted. He was given a total of 3 mg of epinephrine, 300mg of Amiodarone and was shocked three times. The paramedics tell you they have intermittent conversions to what appears to be a sinus rhythm, but then he goes right back to VF.

The above clinical scenario describes what many define as a Ventricular Storm (VS), also known as electrical storm- A recurrent ventricular tachyarrhythmia requiring electrical cardioversion three or more times within 24 hours. Like in the scenario, patients will convert VT/VF to an organized rhythm and return to VT/VF. A very close cousin to a VS, but with a subtle difference, is Refractory Ventricular Fibrillation (RVF) – defined as Ventricular Fibrillation (VF) that does not respond to three or more standard defibrillation attempts.

Most of these patients have severe structural heart diseases such as ischemic cardiomyopathy and nonischemic cardiomyopathy, but in rare instances, they may have Brugada Syndrome, which is an entirely different beast and incredibly challenging to treat in VS. Many of these patients will have a known disease with low ejection fractions and have an internal cardiac defibrillator (ICD).

These patients can present with palpitations and lightheadedness, or chest pain, or even in cardiac arrest. Patients with ICDs may present with frequent discharges from their ICD.

There are several triggers for VS, but the majority of patients have an unidentifiable cause.

Management: (In this post, we will focus on managing the patient in cardiac arrest or unstable VS)

As in the case presented, this patient has already received appropriate ACLS management of VT/VF. At least three defibrillation attempts were provided as well as Amiodarone and epinephrine. Good CPR is essential!

These are some things to consider:

If the patient is believed to be in VS, one of the first interventions is to communicate your thought to the resuscitation team. VS is rare, and many of the modalities are contradictory to the “normal” ACLS management of VT/VF. When you tell your team to stop providing epinephrine during a code, you may get some curious looks. Additionally, if esmolol is not readily available in your department, this may be an excellent time to request it ASAP (we’ll discuss this more in a minute.)

These patients will often require cardiac cath; cardiology should be emergently notified of the case to the facility early intervention.

Because a sympathetic surge often exacerbates a VS storm, the best first intervention is to provide analgesia, sedation, and airway management. Hopefully, these steps will dramatically reduce the endogenous sympathetic drive promoting recurrent arrhythmia by the pain and stress of ischemia, defibrillation, and emotional stress of the resuscitation. Rapid sequence intubation with agents such as propofol or ketamine and analgesics is often therapeutic and may break the storm.

Amiodarone is the antiarrhythmic of choice. In our case, 300mg of Amiodarone was already provided. An infusion of 1mg/kg should be started, and if refractory, Amiodarone can be re-loaded to a total of 1,200 mg.

Other agents to consider as adjuncts would be 2-4 grams of magnesium and supplementing potassium if hypokalemic.

Because of the massive sympathetic stimulation and circulating catecholamines, beta-blockade may be one of the most effective therapies to mitigate VS. First, it’s essential to hold additional doses of epinephrine as this may be stimulating the VS.

Esmolol is a cardioselective and fast onset/offset beta-blocker; it makes it ideal for VS.

If esmolol is delayed or unavailable, IV metoprolol 5mg IV every 5 minutes for a total of 15 mg may also be used but will not be as efficacious.

During this resuscitation, central IV access and an arterial line will become beneficial in titrating medications. I prefer doing both a femoral vein triple lumen as well as a femoral arterial line. A point to consider; if interventional cardiology is going to be taking this patient to the cath lab, caution should be taken not to injure this area as this may be their access for catheterization and possible ECMO.

An ideal diastolic BP of >30mm Hg is adequate.

If all else fails

Hopefully, by this point, the patient is stabilized or on the way to the cath lab with cardiology. If not, the last-ditch effort for mitigating a sympathetic storm is a stellate ganglion block. This is essentially providing a nerve block to the cephalic end of the sympathetic chain, effectively cutting off the sympathetic outflow to the myocardium.

Sometimes ventricular storm is confused with refractory ventricular fibrillation/tachycardia, and I am asked why I didn’t talk about dual sequential defibrillation. Typically, in VS, the patient is easily converted from ventricular tachycardia, but they cannot sustain a sinus rhythm. In RVF, they cannot convert out of their VT/VF despite multiple defibrillations and antiarrhythmic medications. In this case, DSD may be a therapy to consider.