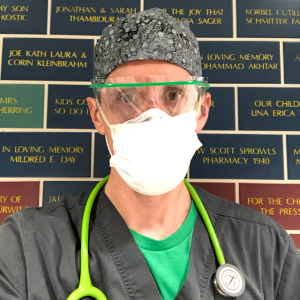 Stephen Biehl
Respiratory therapist specializing in lung health investigations. If not I’m the unit, find me in the PFT lab, bronch suite, rehab, or taking the stairs.

You get called to the ED for a patient with hemoptysis. Depending on the severity, you are thinking that you will be intubating and performing a bronchoscopy quickly. But what if there was a different path you could take? What if you could prevent the patient from being intubated and being able to save a ventilator for another patient? There is a way to do this.

Hemoptysis, depending on severity, can be a life-threatening and poor prognosis. This life-threatening condition due to continuous bleeding can lead to problems with hemodynamic stability and gas exchange. The treatment for the hemoptysis would be to treat the underlying condition causing it, which may take precious time to discover and to give antibiotics for infections. This is where tranexamic acid (TXA) comes in to play.

The Case for TXA

Tranexamic acid is an antifibrinolytic medication that stops bleeding. It is a synthetic derivative of lysine, working by blocking the lysine-binding sites on plasminogen. This in turn prevents fibrinolysis. It tends to be used to control bleeding in hemorrhages, angioedema, and menstrual bleeding. But it has started showing up being nebulized for hemoptysis with positive results.

Regardless of what is causing the hemoptysis, TXA has shown to work well when nebulized. The few studies performed, have all had positive results. A double-blind study by Wand, et al, from 2018, was the first to really look at this treatment. In the study, they split 47 patients into two groups, one group (25 patients) who received TXA for hemoptysis, and another group (22 patients) who received a placebo. Both groups received nebulized treatments of 5 mL three times per day over the course of five days from admission.

The results of this study were dramatic. In the group that received the medication, there was a 96% resolution in bleeding. In the placebo group, there was only a 50% resolution. The TXA group also showed a large decrease in blood that was coughed up. Two of the patients in the placebo group ended up needing bronchoscopies, including one being intubated, while this did not happen in the TXA group. And the length of stay was 2.1 days shorter, at 5.7 days, for the TXA group.

This study also followed the patients for 30 days and 1 year follow up. It found that at 30 days, the group that received TXA had an 8% recurrence of hemoptysis, compared to 27% for the placebo group. And at one year, the TXA group had a 4% recurrence, compared to 22.7% in the placebo group. Death was nearly identical in both groups, at one year both groups lost 4 patients.

In these case studies, there was one case where a patient developed bronchospasms and had to be treated for that. And another patient who had recurrent hemoptysis after the TXA treatments were stopped after 72 hours. And a third patient who had a seizure. Aside from those three cases, there haven’t been side effects reported with nebulizing TXA, but should be noted that there are with other forms. Some of these include abdominal pain, back pain, headaches, and sinus symptoms.

Dosing for nebulized TXA varies from site to site. It ranges from 250 mg to 1000 mg, from a one-time treatment to 3-4 per day over the course of 5 days. On average, cases reporting use have used a 500 mg dose nebulized every 6-8 hours for up to three days, or until hemoptysis clears up.

According to WHO, TXA is a relatively cheap medication that is kept in most healthcare centers already. It can be kept for 3 years and should be stored at room temperature. This makes it easily accessible for use and should be readily available.

The one area that TXA did not perform nearly as well is in bronchoscopies. A review from 2017 did a two year analysis of patients treated with TXA during bronchoscopies. There was a 65% response for patients given TXA through the bronchoscope. Compared to epinephrine it is nearly equivalent at stopping the bleed. The benefit it would have is the decreased side effects that epinephrine carry. It is still a good tool to have for the procedure.

The next time you are called to the ED for an ordered TXA treatment, do not fear. It is safe, effective, and easy to administer. The chance of intubation and performing a bronchoscopy are reduced. And helping that patient get back home sooner are greatly increased, with as little as one dose.

The Case for AVAPS