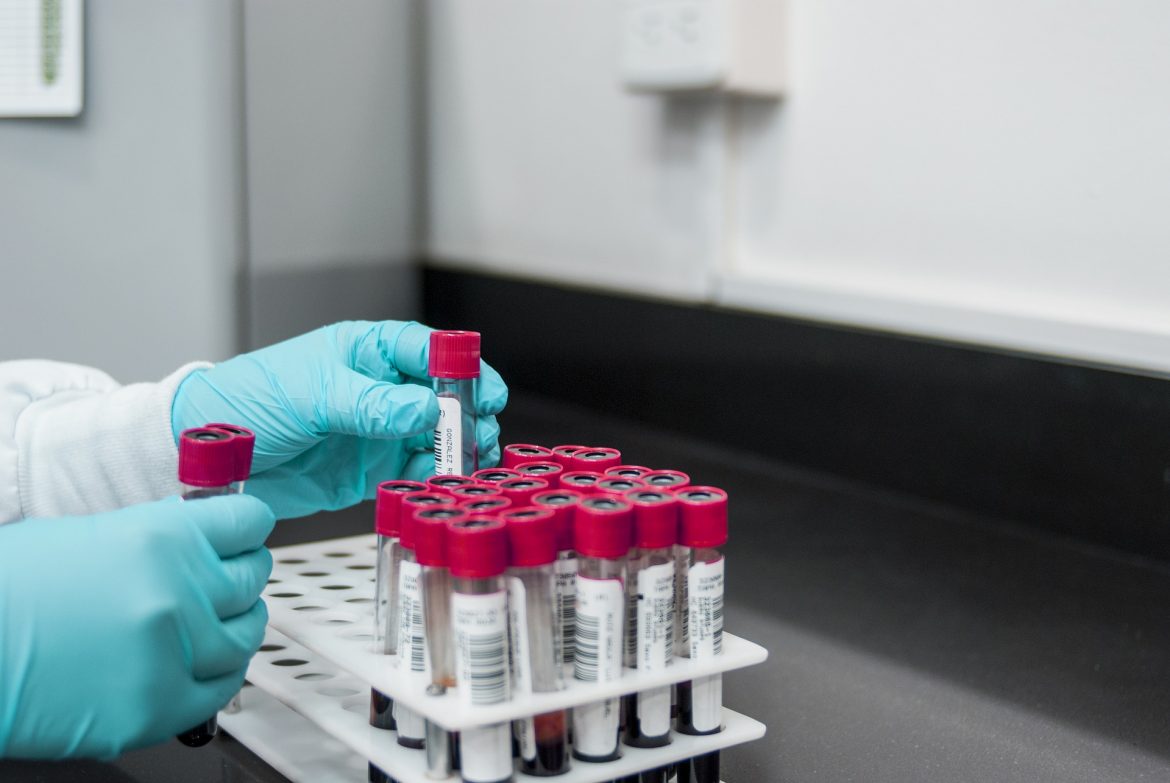 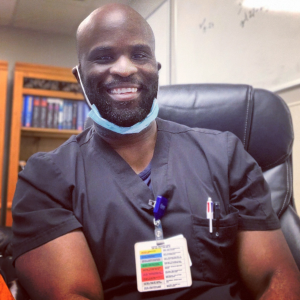 This discussion will focus on the interpretation of critical labs.

Whether in the Emergency Room, Medical Wards, or Intensive Care Unit, the interpretation of critical lab results has become a routine aspect of our daily workflow. As such, it is paramount to adopt a physiological approach that also integrates the presenting history to not only yield an accurate interpretation, but to also avoid “knee-jerk” reactions such as the universal administration of fluid challenges each time we are faced with an elevated lactate.

In the above two case scenarios, the onset of lactic acidosis is a critical lab finding that may signify the development of severe illness and mark the pathophysiological transition from aerobic to anaerobic metabolism and activation of the adrenergic system. In the setting of critical illness, this may have serious implications regarding morbidity and mortality prompting the need for dire intervention. However, to intervene we must first interpret; to interpret we must first understand how to classify: 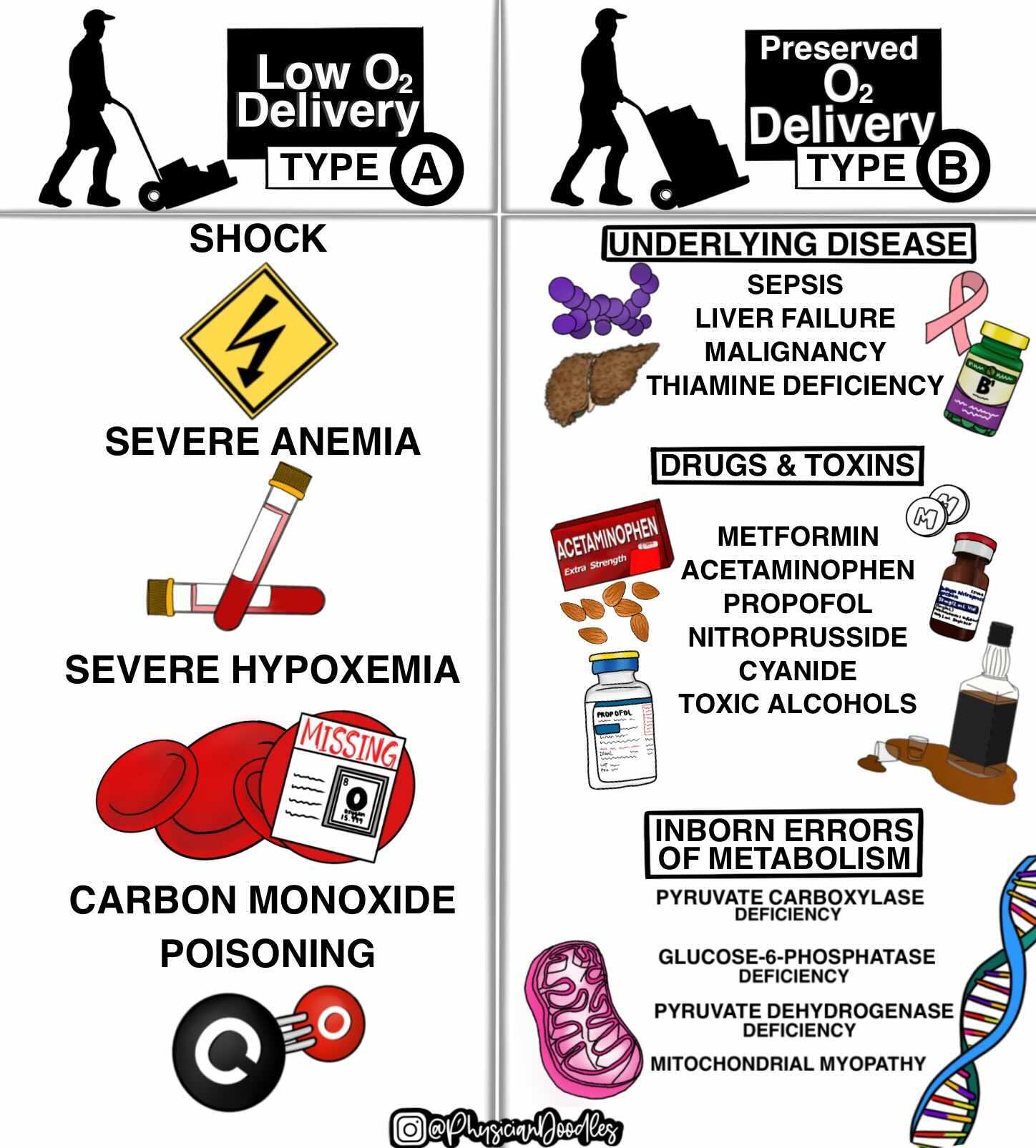 Lactic acidosis in the above patients correlates best with tissue hypoxia (Type A). Hypoxia results from impaired oxygen delivery and/or utilization by the tissues. To understand and address this, familiarizing ourselves with the oxygen delivery equation (DO2) along with its various components will not only allow us to determine where the link in the chain was broken, but also provide some insight as to which intervention is needed to appropriately address it. For a more in-depth review of the oxygen delivery equation and how to use it at the bedside, please refer to THIS POST. 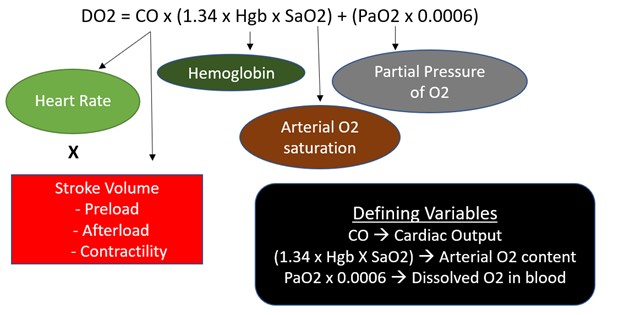 This patient’s presenting history is highly suggestive of viral gastroenteritis (i.e. Norovirus). Her remarkably low blood pressure and recent history of profuse vomiting and diarrhea point towards a state of hypovolemia due to extensive volume loss from the GI tract. This is supported by lab findings suggestive of pre-renal failure (BUN/Cr > 20:1) and low urine sodium; however, volume status would, ultimately, be best confirmed via point of care bedside echocardiography (i.e. Cardiac filling pressures, IVC, VTI). Recall, stroke volume is a major determinant of overall cardiac output and is preload-dependent. Hypovolemia reduces stroke volume by decreasing preload, thereby preventing the ventricles from taking advantage of Frank-Starling mechanisms whereby optimal myocyte stretch generates more forceful contractions. Volume resuscitation with fluid challenges is, thus, likely to be highly beneficial for this patient. As a side note, it may be best to avoid Normal Saline in favor of more balanced crystalloids such as Lactated Ringer’s or Plasmalyte. Normal saline has the potential to exacerbate renal failure which could prove catastrophic in similar patient scenarios.

The patient’s history of heart failure combined with her presentation, exam findings, significantly elevated proBNP and edema on chest -x-ray, raises concern for decompensated heart failure with progression into cardiogenic shock. Despite these findings, this is a diagnosis that can be best confirmed through point of care bedside echocardiography (i.e. Cardiac filling pressures, VTI). In cardiogenic shock, stroke volume is diminished by inherently poor contractility and overall cardiac output is reduced. Her mental state is likely the result of diminished cerebral perfusion from her low output state. Similarly, her labs and urine studies are analogous to a state of hypovolemic hypoperfusion as in both conditions, there is diminished effective circulating blood flow to all organs.  Administration of a fluid challenge in this clinical scenario is unlikely to yield any benefit, in fact, it may prove disastrous. Given her poor cardiac performance, there exists the possibility of ventricular dilation well past the optimal point on the Frank-Starling curve. Causing further increments in myocyte stretching with fluid challenges may paradoxically worsen cardiac function and result in increased morbidity and mortality. To improve stroke volume, efforts should be focused on augmenting contractility using inotropes (i.e. Epinephrine, Dobutamine, Milrinone) with consideration for mechanical assistance (Balloon Pump, Impella, V-A ECMO) if inotropes alone are inadequate.

I’m sure you’ve gotten to look at the ANDROMEDA-SHOCK trial; would love to hear your thoughts on this, and the “lacto-bolo reflex”.

Great study pointing out the need and value of continued clinical assessment in our patients rather than simply relying on labs. The study primarily included septic patients with an algorithmic approach; my approach to fluid resuscitation regardless of the cause of shock will always be a physiological approach incorporating history, exam and findings on bedside ultrasound/echo. That being said, I believe the “lacto-bolo reflex” has the potential to cause harm as it a reflexive action that generally does not incorporate a thought process as to how that lactate got there to begin with.

CritBits: What is Hi-Flow Nasal Cannula?